How to check memory usage on a VPS

How to check memory usage on a VPS

GNU/Linux-based operating systems come with a very large number of utilities to monitor the workflow of your host. Most of them are available via SSH access, visual interfaces for web servers may also provide tools to display it in a more visually appealing way.

Command line tools are available with most GNU/Linux-based servers. They also usually provide the most detailed insight.

Our VPS hosting plans are also provided with access to the SolusVM control panel, which allows you to check different stats from within it, no matter the software installed on the actual server, and if you have cPanel installed, it also comes with a few additional tools.

There are a few ways to check your memory usage in WHM or cPanel control panels. You may check the general overview of the server status via WHM > Server Information and WHM > Service Status, which also includes information about memory usage. For your reference:

There is a variety of different common SSH tools that can provide memory-related information. Further, we will provide a few most common and useful tools, which would be present in pretty much any GNU/Linux system.

This tool is one of the most basic, simple and fast ways to check overall memory usage via the command line. Its purpose is to show the amount of free memory available in the system: both physical and swap memory, and any buffers used by kernel. When you run this command, you will see something like this:

Here are the columns displayed:

There is one nuance you would want to take into account when analyzing the output of the free command. You might occasionally notice very small values for Mem line in the free column. Does it mean there is no free RAM in the system? In most cases, it actually does not since Linux-based systems often use cache for many processes to speed up and optimize programs performance. Only free memory is used for cache, and the system can always clear and replace content of the memory used for cache if there is such a need per requests of other running processes, so it does not actually have any negative impact on the performance.

So, the memory currently occupied by cache is technically not free, but practically can be freed at any moment. If you would like to check how much memory is actually available for processes in your system, take a look at -/+ buffers/cache line, free column. This field displays the amount of technically free memory plus currently cached and buffered memory, therefore, it is a more accurate representation of memory currently available for new processes if such a need arises.

Free command has a few parameters that may be useful. By default, the command displays the output shown in the screenshot. If you add -m or -g after the command, you will get the stats displayed in MB or GB correspondingly. In the modern versions of the free tool you can also use -h, and the tool will automatically use the most convenient units, like this:

This tool displays information about the current virtual memory usage: processes, memory, paging, disks and CPU statistics. When running this command, you will see three lines, first describing the particular sections of the table, second specifies the values displayed, third provides the actual stats at the moment of checking. If you need to check the usage from time to time, you can also add two numbers after the command to specify the delay in seconds between each check and the number of overall checks (if not specified, the checks are infinite until you end the process). Here is an example of the output:

The first two lines provide the information on the organization of the table.

Two values in the swap section display amounts of data swapped to (si) and from (so) disk per second. Two values in the IO section show Input/Output stats for the drive: received from (bi) and sent to (bo) it.

In the system section in stands for interrupts per second, and cs is the abbreviation for context switches.

This tool also provides another way to structure this information. Feel free to use the -s parameter to display stats: 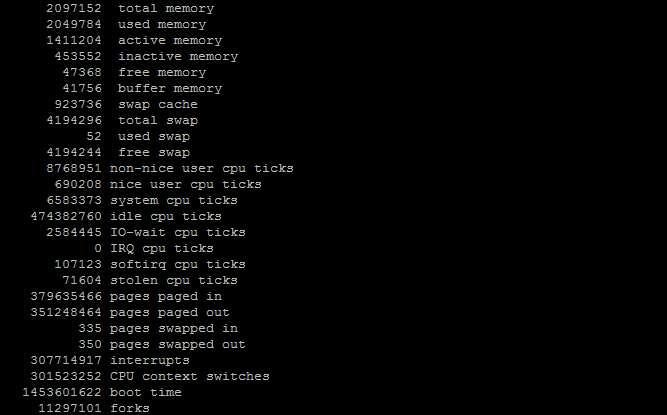